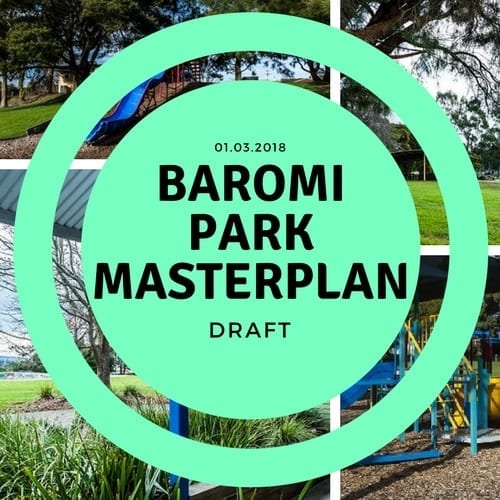 Some of you may be wondering what has become of the Baromi Park master planning process which kicked off last July. After the public meeting and written submissions last July – September, the Shire appointed Andrew Nixon to draft the Baromi Park Master Plan.

During December, January and February Andrew Nixon met with various members of the community to discuss the community priorities, as well as the potential costs and locations for the various elements. He also attended the MN Italian Festa and viewed the usage of Baromi Park during a community event.

The draft Master Plan which he has now prepared and which is to go before South Gippsland Shire Council considers a range of infrastructure projects for Baromi Park, including a basketball half court, a refurbished skate bowl and extension, with shade structure, toilets at the east end of the park, a performance space, a nature based playground (including seating, shelter and possibly fitness circuit) and formal access/parking.   It addresses location and cost of each of these elements. 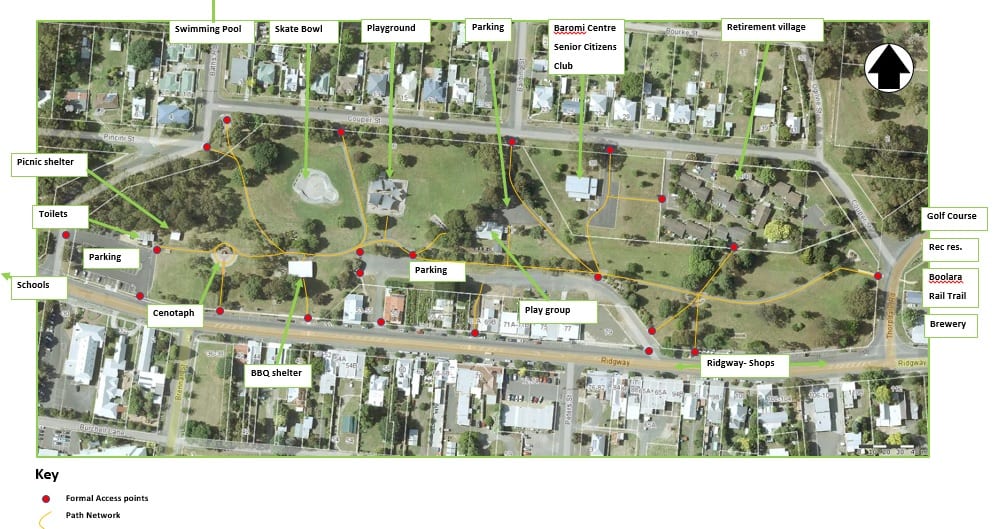 Six priority projects were considered and the recommendations contained in the draft Master Plan are:

The basketball half court has been proposed for many years to provide facilities for young people to be active and to connect socially. It is costed at $18,800 and it is recommended that this be paid for from the $300,000 which would enable its completion in Autumn 2018. The location of the half court would be to the north of the skate bowl. See image below.

This was highlighted as a priority project at the OurSay forum by a group of younger local residents. As skate bowls are expensive to construct, the draft Master Plan’s first recommendation is refurbishing the existing bowl, particularly the surface and the expansion joints. The refurbishment is costed at $30,000 and could take place in Autumn 2018.

The next recommendation is to design and construct a ‘street’ style extension. Street style facilities are sought after by skateboarders and would compliment the bowl.   This would sit on the north western end of the existing bowl and it is estimated that the detailed design and cost for this would be $140,000 and that it could be planned for late Spring 2018.

The Master Plan recommends that the costs of both the refurbishment and extension ($170,000) would be covered by the $300,000. It also proposes to cover the cost of a bitumen path linking the skate park and the basketball half court for $14,000.

While the Master Plan does also include a design for a shelter, seating and drinking fountain next to the extension (costed at $31,500), it does not propose, that this be approved to go ahead under the $300,000, rather that additional funding should be sought for this. Another priority project highlighted by the OurSay forum was the construction of toilets in the eastern end of Baromi Park. The Master Plan recommends locating toilets adjacent to picnic tables and pedestrian crossing on the eastern end of Baromi Park. This is costed at $58,500 and the Master Plan recommends that this would be paid for from the $300,000 and could be planned for Spring 2018.

The only challenge with this proposal is the need for and cost of maintenance – it would require additional manpower within Council to include an additional toilet facility. 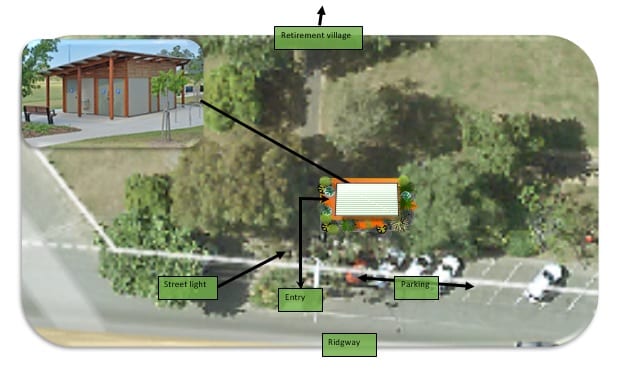 Whilst another priority project, the draft Master Plan notes that this is a high cost item (up to half a million with a sound shell) and therefore the $300,000 wouldn’t cover it.   The draft Master Plan notes the possibility of recommending a raised platform be built as a starting point, and that a cover or sound shell could then be added as funding was received. For this reason it recommends constructing a performance space of 6m x 4m to accommodate 6-10 performers at a cost $25,000.

The draft Master Plan considers four locations for this, recommending location A, south east of existing toilets. It suggests that this $25,000 could fall within the $300,000 and that if the community finalises a location, the platform could be built in Spring 2018. 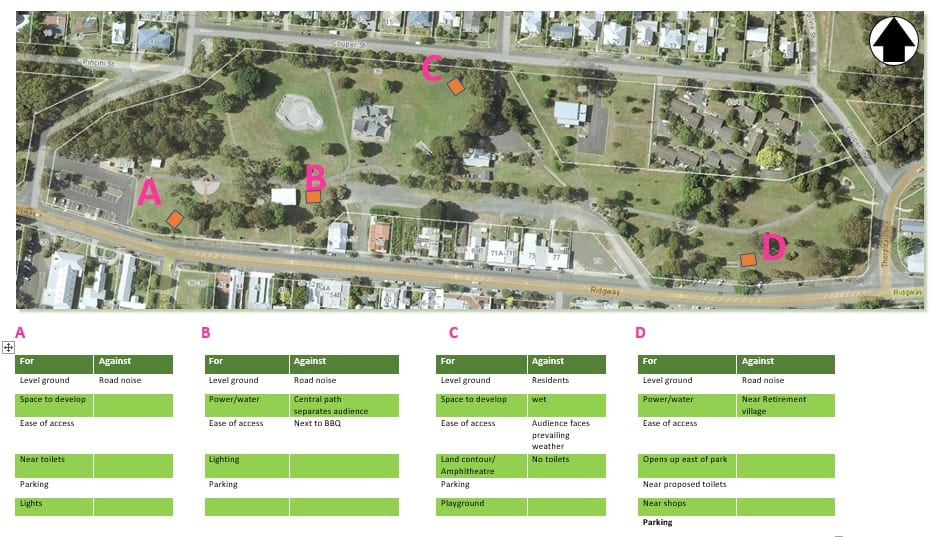 This element arose from the public meeting last July that the existing playground needed enhancements including shade, seating and a nature based play area. The draft Master Plan makes some recommendations about potential locations, design and costings at a high level. However, it recommends that as these would not be covered by the $300,000, that the community set up a steering committee to plan and seek funding opportunities to bring this to fruition.

This was a priority highlighted and discussed at the OurSay forum, separate from the Baromi Park enhancement. However, it is has since become intertwined with the Baromi Park Plan as South Gippsland Shire Council are considering the ‘unofficial’ road into Baromi Park as something which should be formalized (by gazetting), sealed and used for parking for visitors and for the businesses backing on to it from Ridgway to replenish stock etc.

For this reason, the design of this road is of importance to the Baromi Park Master Plan and in the draft Master Plan there are some recommendations in relation to access and parking for caravans and trucks:

It is recommended that the ‘old’ road entrance west of the Grain Store be re-opened to replace current access east of Grain Store. It is also recommended that this be a one way system with a western access and eastern exit, both being single lane, to control speed and minimise impact in what is essentially a recreation area. It is not specified if there is a size limit on trucks entering the area. The layout of this road and parking is set out in the image below:

The final recommendation is that $10,000 of the $300,000 go towards designing the appropriate access and exit and parking bays for this entrance to the Baromi Park.  This is only a very small portion of the signficant investment that will need to be made in gazetting and constructing this road, the funds for which will be sourced separately by SGSC.

The draft Master Plan addresses the six priority projects highlighted by the community during this process, recommending locations, designs and next steps.

Most interestingly, it also recommends which projects should be covered by the $300,000, and if approved what will be happening in the Baromi Park in the not too distant future!

If you have any thoughts or comments on this draft Master Plan, please contact the Mirboo North Community Project Officer, Thomasin Bales at mcdi.3871@gmail.com or 0439 378 195.

Summary of recommendations for $300,000 expenditure 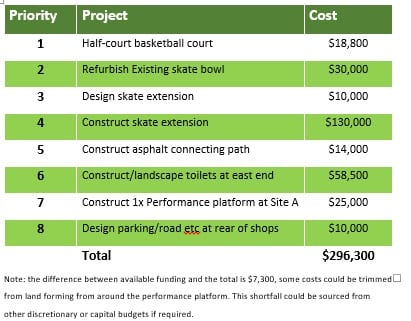