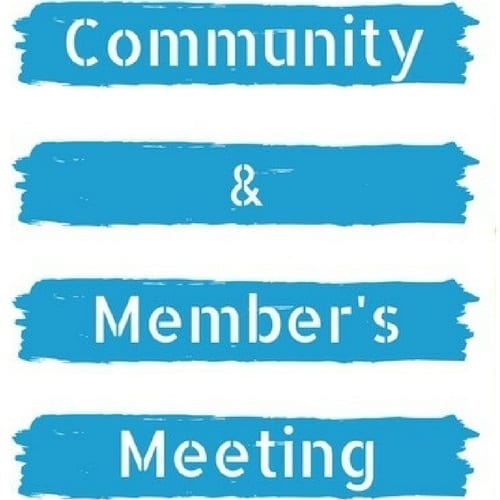 It was a cosy gathering at the Baromi Centre on Monday last with our members and the broader community coming together to get an update on what the Community Foundation has been up to for the last six months.  It was a bit of a whistle stop tour as there were six speakers, including Community Project Officer, Thomasin Bales and Jodie Pincini in her role as Secretary to the Friends of the Mirboo North Swimming Pool. Vice-Chair, Rob Kiddell, opened with a welcome, then EO, Ruth Rogan gave a brief activity update for the first half of the year; from the new monthly e-newsletter to Education Support Fund scholarships, from small strategic grants for the MN Community Energy Hub and the MN Swimming Pool to co-hosting the Transitioning Coal Communities Forum, from sponsorships to Facebook and welcoming Viv Williams in her role as Media and Operations Co-ordinator.

Ruth noted that the theme for the night was capacity building; communities don’t lack for good ideas, rather it is a gap in their skills and capabilities that holds them back.  If the gaps can be filled, it will enable the  strengthening of the community from the bottom up. 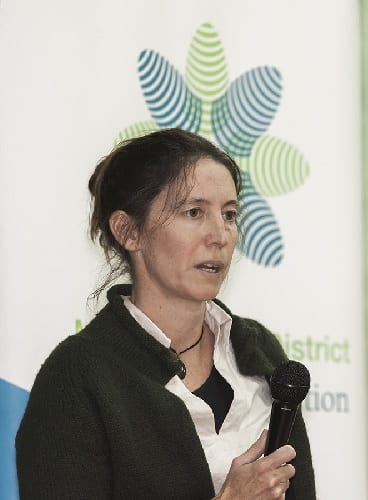 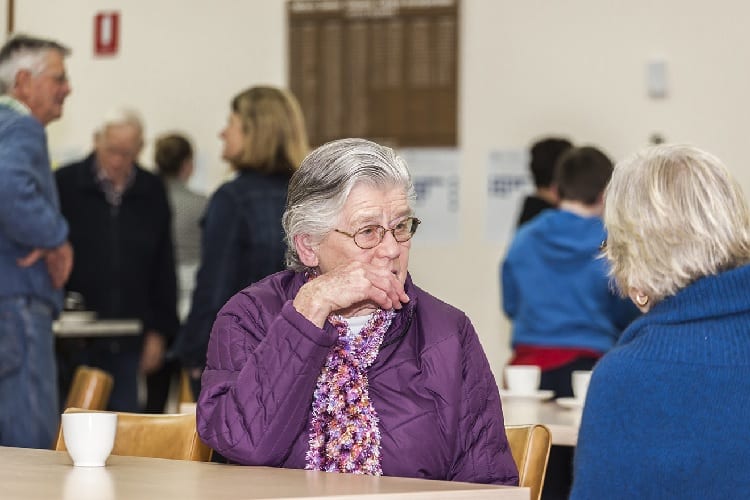 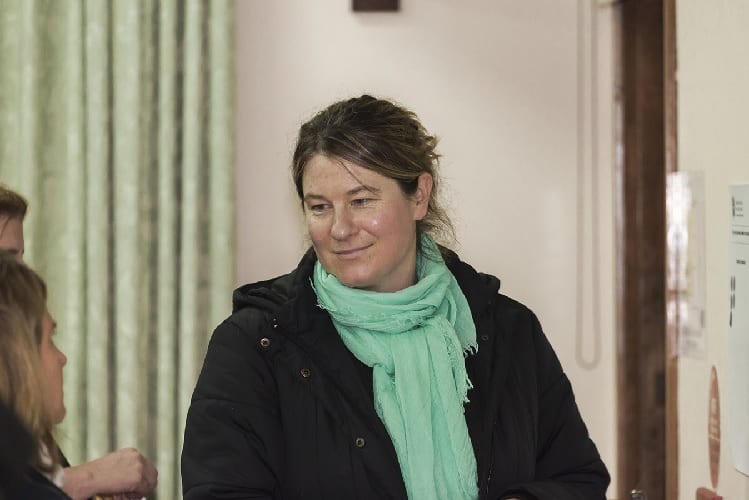 Thomasin (or ‘Tom’) Bales’ role as Community Project Officer is jointly funded by the Community Foundation and the Community Bank with the objective of  not only strengthening Mirboo North as an area but also of strengthening the capabilities of the community groups who are based here.  During her 8 hours a week she has already refreshed the Easy Find Directory, the Community Organisation List, carried out a Traffic Survey and assisted with some local events.   She is now working on finalising a communication strategy, reinstating some Mirboo North ‘Services’ signs and gathering local interest in the creation of a Boomerang Bags group.

Projects on the horizon for Tom, including helping with the Baromi Park Masterplan, the Fundraising strategy for MN Swimming Pool and advertising the renewal  of the Arty Gras committee for all interested.

Tom was also one of the two individuals sponsored to attend the Communities in Control Conference at the end of May, and she told us a bit about that.  For more on this, have a browse of her article.

Kate Buxton, Board member of the Community Foundation, then took the floor to give everyone an update on the Transitioning Coal Communities Forum, which the Community Foundation had co-hosted in April.  Kate noted the similarities between Appalachia and the Latrobe Valley, including the knock on effects across the region, just as Mirboo North and South Gippsland are feeling the impact of the Hazelwood closure.

Kate shared her key take-aways from the forum with the meeting, the first being that change starts with a shared vision; it starts by asking questions like where do we want to go together.  If we can agree on a destination then navigating the path to that destination becomes much easier.  In Kentucky, one way they did this was by bringing community members and local organisations together to think about a ‘bright’ future.

Kate’s second takeaway was that there is power in community.  In Kentucky, locally created and locally driven initiatives created new jobs and economic wealth.  Of course, politicians, when they saw this, were keen to jump on the band wagon, which enabled these great ideas to be scaled up.

Finally, her third take-way was that there is a key role for community organisations, like community foundations, in change.  It isn’t the job of any one community organisation to take ownership, but rather to act as catalysts and enablers; to create a space for different, sometimes conflicting voices to come together as collaborators around a shared vision and to recognise that there is no silver bullet solution. Complex change and challenge requires a multi-faceted response which engages the whole community.   In Kentucky, this included growing effective networks, developing an ecosystem of support for local actors and innovators and asking what are the resources needed to bring good ideas to life.

In thanking Kate, Ruth noted that the two individuals who came to speak at this Forum, Lisa Abbott (Snippet 1) and Justin Maxxon (Snippet 2) were really quite inspirational, and it was worth watching the snippets or even the full event on our website (as the forum was in fact captured on video by local Brian Doherty of Hi-Tech Visual Productions).

Jodie Pincini, Secretary of the Friends of the Mirboo North Swimming Pool 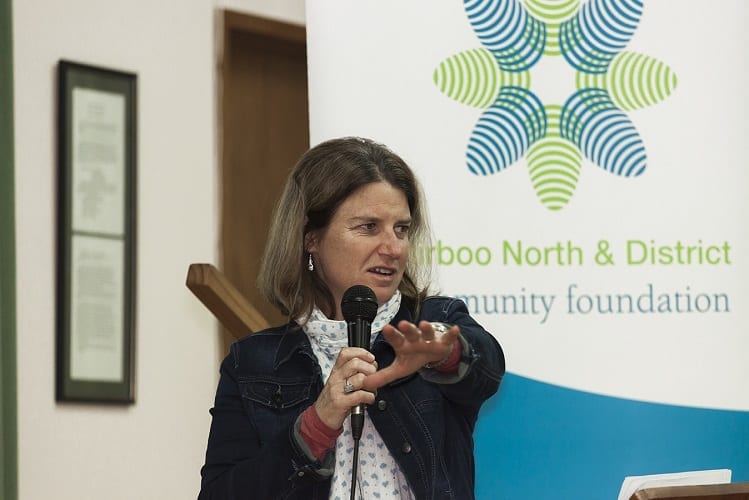 In her capacity as Secretary of the Friends of the Mirboo North Swimming Pool, Jodie addressed the meeting about the current plans for the redevelopment of the MN Pool.  She noted that it had been a bumpy road at times, but that with the support of the Shire, they were working towards a redevelopment of the pool to take place in the Autumn of 2019.

Jodie noted that the Friends of the MN Swimming Pool were now focused on their fundraising strategy and how best to raise the approx. $500,000 needed for the redevelopment.   She told the meeting that their next step would be to hold a fundraising strategy workshop with an external facilitator and she thanked the Community Foundation for their support of $1,000 for capacity building around the fundraising strategy.

Next to speak was Viv Williams, who spoke about the importance of engaging through social media.  She announced an initiative by the Community Foundation to hold a Social Media workshop for a member from 10 different community groups.  To find out more, have a look at Viv’s article. 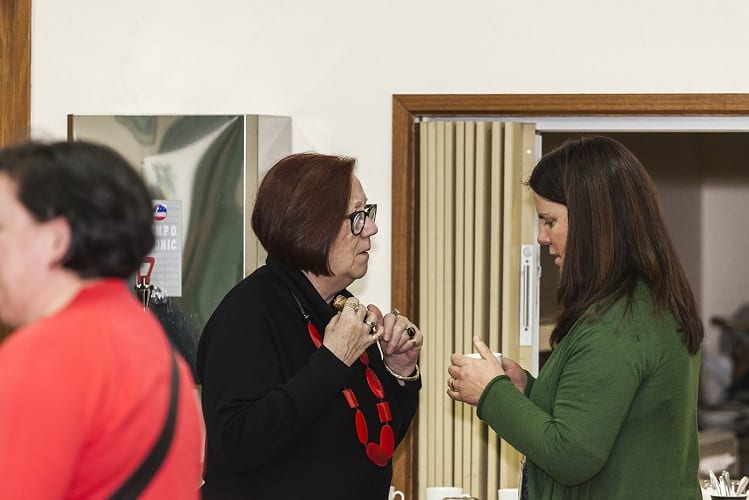 Ruth Rogan then spoke about one of the Community Foundation’s key projects for 2017, which is to look at the role of the members.  The Community Foundation is one of the lucky few that has a valuable membership base, but it had heard the messages in last year’s survey, which indicated that some members were feeling somewhat disengaged, out of the loop and unclear about what exactly the role of the member was.

In considering this, Ruth suggested that the people best placed to come up with a meaningful role for members, clarifying what the benefits or membership are and so on, would be the Members themselves. She requested that Members would get involved in a two hour Members workshop to discuss these issues and come up with some answers.  This membership workshop will take place on the evening of Monday 24th July at a time and venue to be decided.  It hopefully will include 8-10 Members, a few Board members, the Executive Officer and the Media and Operations Coordinator.  All Members are welcome, so if you are interested in getting involved in this discussion and can attend on that date, please contact Ruth on 0418 301 092.