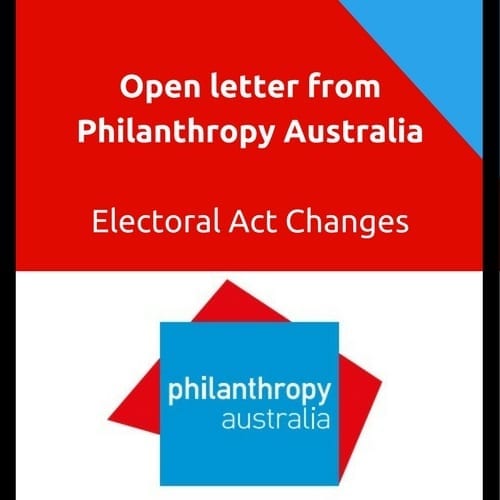 There is significant concern in the charitable and social change sector about proposed amendments to Australia’s federal electoral laws. Unfortunately due to over-broad definitions in the Electoral Legislation Amendment bill, the impact of these changes, which are intended to prevent foreign influence in Australian elections, will go much further. In their current form, they will limit debate and public policy development, both key to a healthy democracy. Many charitable and civil society organisations are campaigning for the withdrawal of this bill.

For a good summary of the issue, have a look at the fact sheet written by the Human Rights Law Centre https://www.hrlc.org.au/factsheets/2018/3/13/explainer-whats-wrong-with-the-turnbull-governments-electoral-reforms

While this would not have a major impact on the current activity of our Community Foundation, it is quite possible that in empowering our community to find local solutions for local matters, that we might want to allocate grant making money on advocacy for a charitable purpose (which is an existing and reasonable limiting factor already set out in law). The proposed bill would still allow this activity, but it would be subject to an expensive and bureaucractic compliance regime with severe penalties (up to 10 years in jail). This would ultimately stifle the appetite of charities to engage in non-political advocacy, and therefore limit the ability for a community to give input on public policy development. 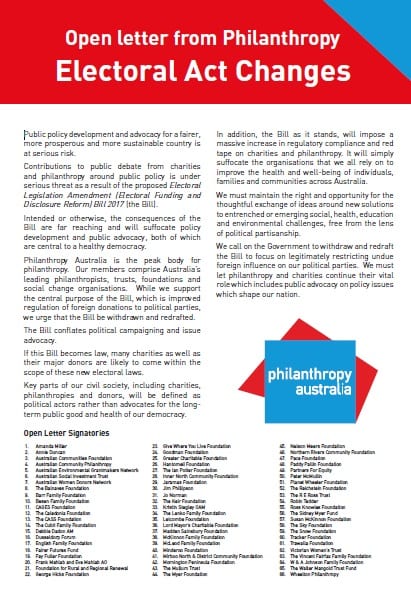 For this reason, the Community Foundation put its name forward as one of approximately 60 signatories to an Open Letter drafted by Philanthropy Australia. This letter set out the concerns of the philanthropic sector and was published in the Australian Financial Review on 1st March (see copy).

Another interesting article on the subject was published in the Age the following day from Martin Myer AO and Jill Reichstein OAM : https://www.theage.com.au/national/rules-around-foreign-donations-threaten-to-cripple-our-charities-20180228-p4z248.html